You’ll no doubt have paid due attention to the first two instalments of my Barcelona trilogy, where I discover the most singular shoes I’ve ever seen and where I go on a pilgrimage to the awesome Companion Denim, so this is where I mention the rest and wind things up.

So, if we are to delve into the rich heritage, cultural depth and sheer awesomeness of Barcelona, where should we start? Where everyone that arrives in a fantastic new city starts, by mindlessly wandering the streets looking at shops. And trust me, Barcelona has the same selection of shops as any middling to large town in Europe, so you’ve been there before and you really don’t want to waste time there again. The huge, straight street running through the centre is La Rambla, and it is rank with the usual shit shops. At the top end it’s even worse as that is where all the really spendy shops are. 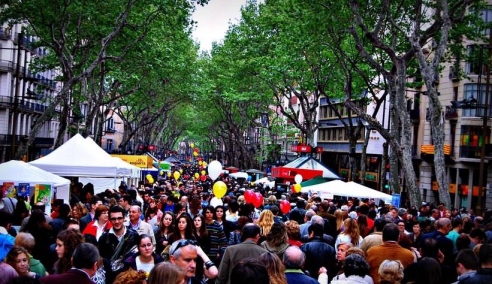 La Rambla is boring though and there is no reason to waste time there. I did notice something amusing though. In Spain, as in much of Europe, the selling and buying of fake goods is prohibited, but I noticed that this didn’t seem to stop any number of enterprising young fellows. What I hadn’t see before though was that they would lay out their good on sheets, with strings attached to the corners.

So when a policeman would saunter up the road, shops closed up toot sweet and the sellers would saunter off to lurk in the shadows until the coast was clear again. It just goes to show how good humans are at adapting to circumstances. Even if all they’re doing is selling moody goods.

Just off La Rambla though is the old town, the Gothic Quarter. This is all old old buildings and narrow alleys. Almost no traffic, very much fewer people and the buildings rise up a few stories above you, so it all just seems a little secret and mysterious. And this is where things get more interesting. I already mentioned Nu Sabates and their shoes.

We also discovered Humus here, a shop specialising in sustainable eco-fashion. A sweet little shop with a nice selection of shoes and clothes. I found a pair of handmade veg-tanned leather shoes by local Spanish brand Nagore there, plus a pair of linen socks from Germany, and was well pleased. Just nearby I also noticed an interesting sign outside a narrow shop. “Oscar H. Grand, tailoring”. Unfortunately this was closed. Hmm. Siesta can be something of a pain if you’re not the one taking it!

I was back in the Quarter a few days later though and wanted to have another crack at visiting the tailor. Closed again! Inspecting the small sign displaying the opening times though I discovered that opening was imminent and decided to stay put. And sure enough, minutes later a dapperly turned out young man came cycling along the alley on his vintage fixed-speed racing bike. I was reminded of a young Midge Ure, around the time Ultravox recorded “Reap the wild wind“, and naturally this chap was Oscar the tailor.

Oscar proved both very enthusiastic and superbly talented, designing and tailoring his garments, running his shop, and keeping half a dozen local seamstresses busy. We had a wonderful chat, finding much common ground and I couldn’t resist buying one of his splendid waistcoats. I recommend checking out Oscar and his wares if you’re interested in quality design and fabrics. His Instagram gives you an idea of the spread in age and style of his customers as well. Splendid!

An interesting point about the Gothic Quarter is that in olden times the alleys almost became tunnels, as the residents were building balconies and extensions into the space above the alley. In the end the area was so ripe, crowded and diseased that a new town plan had to be made, right next to the Gothic Quarter. The civil engineer that drafted the plan had the unusual idea of rounding the corners of all the buildings. Why? Well, way back in the mid 1800s he foresaw that some day there could be horseless carriages and rounding the corners would increase safety by allowing people a better view. Clear evidence of time travel, I reckon!

There is much more to be found in the Gothic Quarter, though opening times can be tricky. Some places are open all the time, others close for siesta and Sundays, so I found a few other interesting places to be closed. Which meant I did stop by places I normally wouldn’t, and discovered things I shouldn’t! Like in this clothes shop where someone had decorated a table using a pair of front wings from a vintage car. I instantly noticed that these belonged to a first generation Jaguar XJ6 and in this rust-free condition they are worth ten pairs of the trousers on the table. And I could have used them. Before they were cut up, that is. 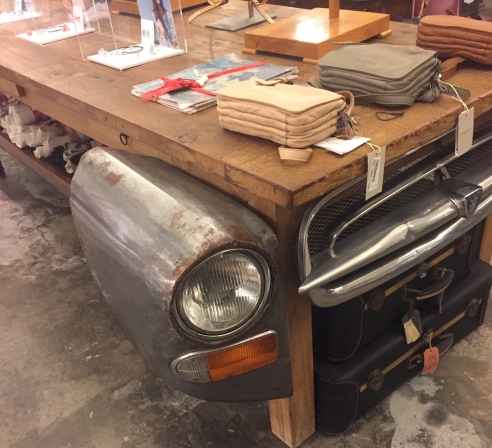 When it came to street art I didn’t find Barcelona to be very impressive. Most of what I saw in the centre was pretty scrappy stuff, endlessly painted over. In fact, taking the train out to Sitges showed a lot more decentish work, as there are any number of flyovers and concrete walls to paint on. Hard to photograph from a train at speed though!

I'm always on the lookout for interesting street art. So far there has been little to find in Barcelona. Sitges (insert) is even worse 😃 #streetart #barcelona #sitges #grafitti #welldresseddad #dadstyle #ontour

Oh, finally, do youself a favour and look up where to find some of Gaudi’s work when you visit Barcelona. It truly is the weirdest architechture you will ever see. Half the time I couldn’t decide if it was pure genius or a totall piss-take. At least take in the Sagrada Famila, a cathedral that was started in 1883 with construction still ongoing. It’s like Disney meets Aliens, in concrete. Fantastic really and it rekindles some of my faith in human creativity, a faith endlessly dulled by the number of shitbox buildings that are built today. 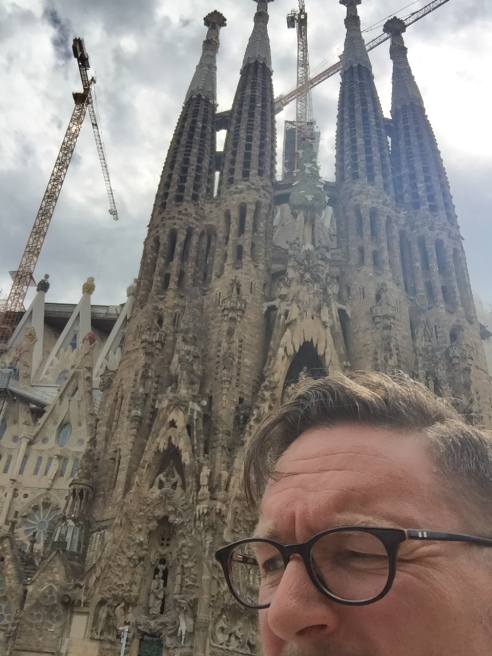 Bought this cool pair of shoes by @nagore_shoes when I was in Barcelona. Found a splendid shop called Humus in the Gothic Quarter, specialised in eco and sustainable fashion (something I firmly support!). These shoes are handmade in Spain from veg-tanned leather and natural rubber. Incredibly comfy to walk and even run in! #sustainable #eco #vegtanned #barcelona #humus #welldresseddad #newshoes #dadstyle

One Response to “Winding up the Barcelona trilogy – the savories”