Today I’m taking a look at the new book “Denim Dudes: Street style. Vintage. Workwear. Obsession.”. It really aims to do exactly what the laughably poor “Denim Style” was trying to do, i.e. present the individual styles of personalities within the denim culture. The author is Amy Leverton, denim trend forecaster and generally vibrant denim enthusiast.

Publishing a book on a style of clothing must be a fairly challenging task. Or maybe not, if you aren’t required to do a good job of it. If the topic is “denim style” it might even be really easy. Just round up a bunch of impressionable folks wearing something denim-related, have a half decent photographer man the camera, collate the photos and before your espresso is served, you have a book. Is “Denim Dudes” better than “Denim Style”?

The concept is simple enough. There are three parts to it, “US”, “Europe” and “Japan and Australia”. Each part has it’s selection of men that get 2-6 pages of space, and a few paragraphs to say something vital and insightful about denim. The photography is by 14 different photographers.

The end result really comes down to the people that are included, how they chose to portray themselves and whether they have anything interesting to say. And the people are a mixed bunch indeed. Described as “Founders of denim companies, designers, actors, musicians, creative directors, CEOs and store owners” they would certainly appear to be a step up from the baristas and tattoo artists so prominent in “Denim Style”. The people included must be passionate about their denim though, maybe even describe themselves as living for denim, bleeding indigo, being all about the vintage finds, dreaming of Japanese selvedge slubby weaves and so forth. Without being obvious wankers, of course.

Without keeping tally though there does appear to be an overweight of guys in the business of selling denim, and they tend to provide the least interesting text. Some even come across as quite odd inclusions for the book, as a couple even state that they don’t like or wear denim! There are plenty of obvious omissions when it comes to the “Dudes” included as well, and the book would have been better if a few of the included lame ducks had been culled. On the plus side the selection offers a lot of variety in ages, background, style and outfits. The variety does make it a lot more interesting. 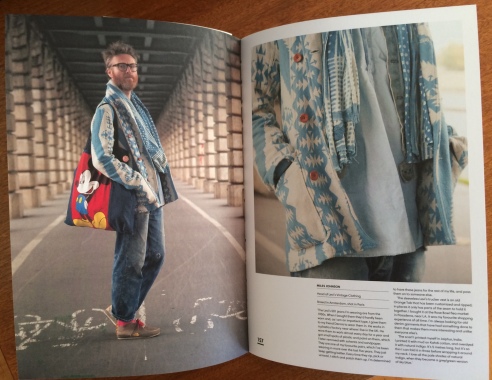 The text is where the book has the chance of being a bit different from a mere picture book. Whereas “Denim Style” collated it’s captions on a double-page at the back of the book, “Denim Dudes” has text for each person presented. Not a huge amount of text, but 2-3 paragraphs or so. Enough to make it interesting. If the person has something interesting to say, and I have enough faith in humanity to think that most people should manage to come up with around 60 words.

This doesn’t quite work out though as it appears people might have been given different briefs about what to write. And this becomes a problem when where some give a nice, personal take on things, describing their history, favourites and so forth, others take the opportunity to merely promote their company. This is a shame and the text parts should have been taken a bit more seriously.

The photography is mostly excellent, with good variety, yet maintaining a uniform expression. The authors own text, in the intro and between sections, is fair, but the oversize font used makes it almost unreadable.

The end result is a picture-book with enough text to slow you down a bit. I spent an enjoyable couple of hours reading through it and thought it quite worthwhile. Whereas “Denim Style” came across as a pretentious picture book for kids, “Denim Dudes” is the more adult version, for people that can read as well as point and laugh.

“Denim Dudes” is published by Laurence King Publishing on February 9th and should be available from all the usual places. The ISBN is 978 1 78067 4186.

One Response to “Book review: “Denim Dudes”, another take on writing about denim”