Yes, I know, you’ve all been missing my Waistcoat Wednesday reviews, and I feel bad about it. Truly. However, I have a new one today, and will hopefully have a couple more in the coming weeks.

Today’s offering is another fine piece from Scotch & Soda, consistent and fine supporters of the waistcoat through each season. This one I discovered in their small shop in Mitte in Berlin and well, the “possibly scarlet” herringbone wool was irresistible. When I say “possibly scarlet” I may sound like I can’t tell one colour from the other, but in this case it is tricky, as the colour is wholly dependent on the light it’s viewed in. Looking at the selection of photos included here illustrates this, although photography does introduce it’s own issues (and more so if you’re really not that proficient at it!). 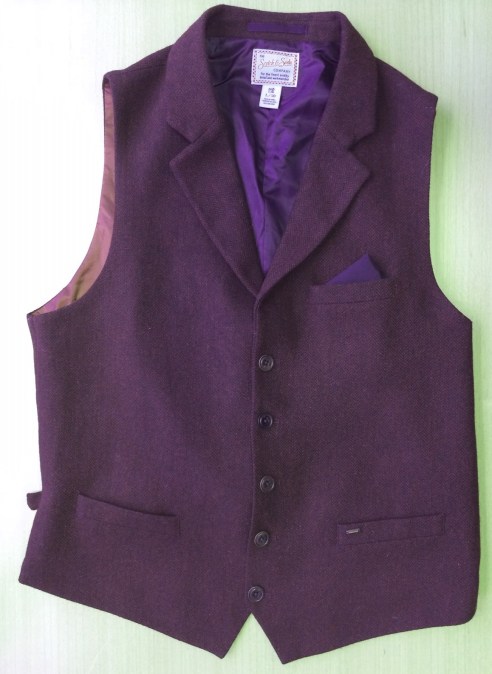 So, what do we have before us? Basically a quite traditional herringbone wool waistcoat, with full notched lapels and collar. I like the fact that it is made as a standalone waistcoat, with the rear in the same fabric as the front. I greatly prefer this to the variants where the rear is done in a lesser fabric, such as plain cotton or silk-like acrylic fabric. This is obviously the style a waistcoat belonging to a three-piece suit would be done in, as a back piece with low friction fabric will help the jacket lay nicely, but for a waistcoat used alone it looks so much nicer if both front and back are made in similarly attractive fabrics. 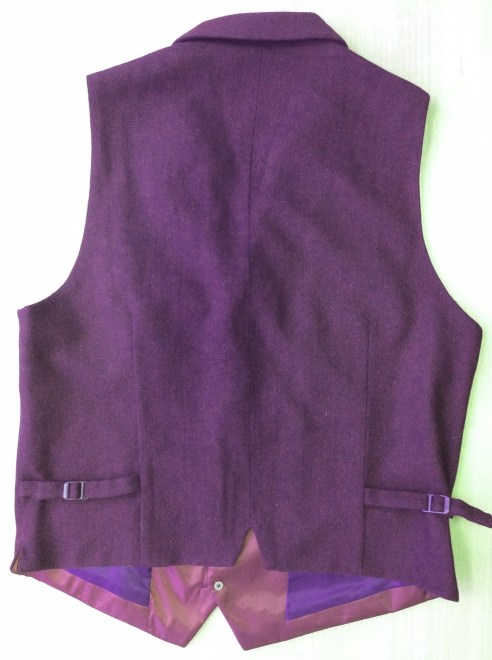 The pocket layout follows the standard 3 pocket variant, with two symmetrical pockets near the waist and a single chest pocket. The lower pockets are temporarily stitched closed, which isn’t a bad idea as they are really too shallow to be of very much use and closing them does make the front look neater. The single chest pocket is a bit larger and actually holds a smartphone, though if you bend forward at an angle greater than 90 degrees, it will slip out as the pocket lining has little friction.

It took me a while to notice the little bonus included with the waistcoat in the form of a pocket square, always nice to be surprised in this way. It does make me wonder though if Scotch & Soda might not be undermining what appears to be the major growth industry in the UK these days if they’re going to be giving away pocket squares at no additional charge! Industry pundits are now afraid S&S will go after the strategically important bow-tie market next in their effort to undermine Britain’s rise to previously lofty industrial heights.

Speaking of pockets, there is actually a fourth pocket included, on the inside. Sized to hold a few business cards, or something of a similar size. A nice touch, as are the small labels S&S typically include in their garments with small messages. Not something that adds massively to the value or utility of their garments, but does show that they are not cutting costs down to the bone.

The willingness to do that little bit extra is also indicated by their use of specially made buttons and custom hardware for the cinches at the rear of the waistcoat. The little sewing machine imprint on the buttons more than makes up for them being faux horn buttons, if you enjoy the small details. I have previously given Scotch & Soda a big thumbsup for their waistcoat hardware in my state of the nation rant about the lamentable state of waistcoat hardware.

If there was one point I could mention that detracts from this offering, it would have to be that it is made in China. Unlike others I could mention, Scotch & Soda don’t make a secret of this, it is in fact stated on two separate labels. It does go some way to explaining how they can make a nice waistcoat like this at what is really a pretty decent price though.

Another example of the small touches all combining to make a decent total is the fastening of the buttons. I’ve seen very much more expensive waistcoats where this small detail has been ignored. Over time the thread holding the buttons can work through the wool fabric unless a small leather button like this is used. Plus it spreads the load a bit, which will allow the button area to sit smoother. Well done.

All in all a pretty decent waistcoat! 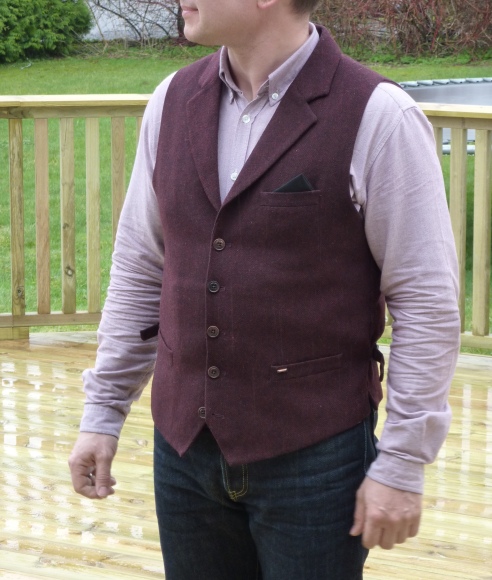